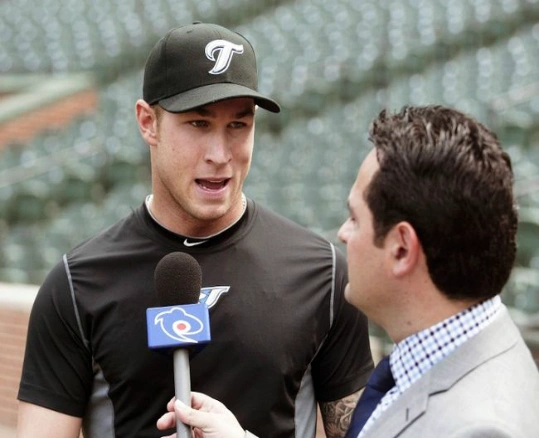 I was born in London, Ontario and always wanted to do NFL and NHL play-by-play. I used to joke I knew I wanted to be involved in sports broadcasting when I was a day old!

After attending Fanshawe College and graduating from the Broadcast Journalism Program, I got my first real media job at CFOS-AM radio in Owen Sound, Ontario in 1987.

I did a bit of everything- from newscasting to sportscasting to reporting. I covered City Hall, Board of Education, various court proceedings and elections (municipal, provincial to federal). I did colour commentary on OHL games. I also hosted a nightly sports talk show called "Sportsticker." I was so lucky having the chance to talk to so many of my idols- from Gordie Howe, Jean Beliveau, Dave Keon, Danny Gallivan to Tom Cheek.

From there I went to work at Queen's Park for a brief period of time before being hired by the Score Television Network. I was able to cover the NHL playoffs, Memorial Cups, Grey Cups, Golf and Tennis tournaments, and Blue Jays baseball while I was at the Score.


In 2009, I joined Sportsnet as a freelance reporter. Again, I have been fortunate to cover the World Series, NHL playoffs, and the Blue Jays.

​I currently work at TSN, TSN1050 Radio and TSN.CA and I teach at the College of Sports Media and Centennial College in Toronto. And I also am involved in descriptive video work for Accessible Media.

I have also done live descriptive video for the visually impaired during the 2018 Winter Olympics for NBC.

If you are looking for a freelance reporter/host for radio, print, web or TV I have plenty of experience and a wide range of ability.


​I can be reached via email: tonyambrogio2000@yahoo.com

If you wish to reach me please do so here.